Tag: Star Wars and Other Galactic Funk by Meco

To Disco, With Love

That is the title of a new book in the works right now.  It won’t be out until the fall of 2015, but I saw some pages from it and it looks really exciting.  And I hated, and still do hate Disco music, but no one can deny that the music and the artwork associated with it was some really exciting stuff.  I was more into English Traditional music or Folk-Rock, or Country-Western in those days.

The book title is To Disco, With Love: Albums That Defined The Era, by David Hamsley, and will be published by Flatiron Books.

I came to know about it because David is using one of my best known illustrations.  Back around 1977 I did the album cover for Star Wars and Other Galactic Funk by Meco.  That album was a huge success.

I actually tried to get out of doing the job because the deadline was cut from one week to three days, but Steve Lumel, the art director talked me back into it.  No sleep and three days later, we were finished.  It was a fun project, though I always wished for more time to do a better job, but people seem to like it.  It was in an art exhibit a couple of years ago, entitled The Hundred Worst Album Covers In History.  As we were going to see the show, I joked that I wondered if my Meco album would be in there.  And it was!  I was relieved that it wasn’t because I did such a lousy job in the painting, but it was in the category, “People Who Are Having Entirely Too Much Fun!”  I actually think they missed the point.  That was what Disco was about wasn’t it? 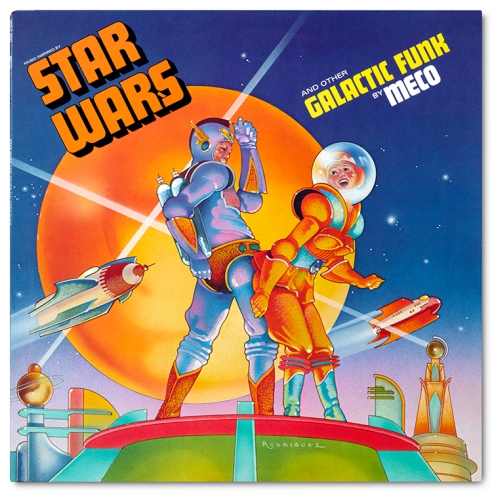