IT WAS ONLY A PAPER MOON

Paper Moon Graphics, what a great place to work.   Almost complete freedom to do the art the way you wanted it.  I remember you would go in there sometimes with a sketchbook and show them your ideas and they would pick one and tell you to finish it up.  And it worked that way from the beginning, when I started with them.  Linda Barton, Robert Fitch, and Roger Carpenter all went with what worked, and it was a ground-breaking company.  They did often commission you to paint their ideas as well, but they trusted the artists to interpret everything and didn’t over direct.  Artwork is always so much better when the designer and the illustrator work together, rather than the art director telling you exactly how to handle every brushstroke.

I wasn’t in on why it ended, but I have an idea that it was because they were so good, that everyone copied them.  Of course the imitations were never as good, but they were probably cheaper to produce, and cheaper to buy.  But for anyone who worked for Paper Moon, it was something you will never forget.

I just remember, until Paper Moon cards, I used to buy these cartoony cards for whatever occasion, or make my own.  I was never really happy with what I used.  But once I saw the kind of cards Paper Moon was doing, I never bought anything else.  And Paper Moon was more expensive, but it didn’t matter.  It wasn’t even a consideration because the art was so superior, and the attitude was so cool. 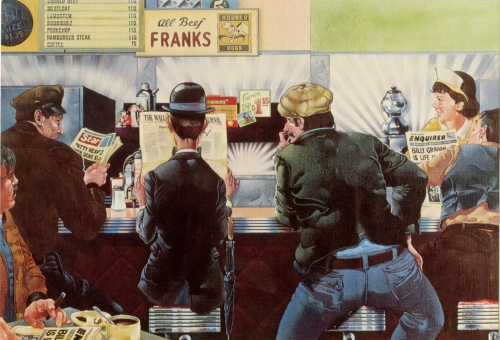 On the extreme left (mostly cropped off) is a self-portrait.  I am also listed on the menu for $1.10.

The bartender, the diner, and the adult motel were all originally done for Oui Magazine.

Poor Santa, I somehow forgot one of his fingers.  A horrible toy-making accident, I suppose.

This image was originally an ad for Schwinn BMX bicycles. 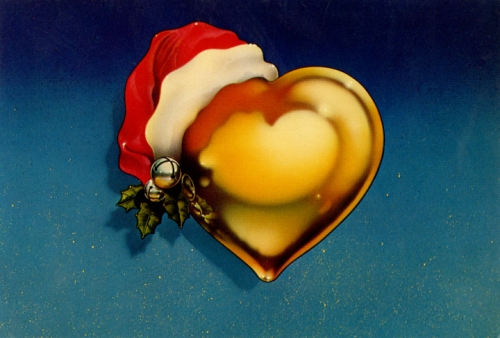