MASTERS OF THE ILLUSTRATED FILM POSTER at SDCC

Some say the art of the illustrated movie poster is dead. They maintain that most major studios would rather have soulless floating heads jumbled together in a quick photoshop job than anything strikingly different. Others would say the illustrated movie poster is having a renaissance. With licensed screen-printed alternate posters from independent outfits like Mondo and Bottleneck Gallery, the art of the handmade movie poster has been flourishing outside of the Hollywood machine.

At San Diego Comic Con this year, ASIFA–Hollywood (International Animated Film Association) and an all-star panel of famed illustrators from the last 50 years of entertainment art came together to discuss their craft from the past, present, and future.

The panel began with the moderator, Stephen Kramer Glickman, asking the group what the art of illustrated movie poster means to them. Steve Chorney broke the ice with a simple answer: “We get paid to do it.” Chorney always wanted to be an artist, and once he had a job in the animation industry, he saw a poster John Alvin did for Blazing Saddles. “That made me think I should be doing this, and I moved in that direction,” he said.

No matter what got them into the industry, all the artists agreed that what they do is important to keep the art form alive. Some, like Akiko Stehrenberger, spoke of seeing something new every time she looked at a classic illustrated movie poster, something you don’t often get with a photoshopped image. The idea inspired her to hide Easter eggs in her own work, or even references to plot points that fans wouldn’t notice or even understand until they saw the film themselves.

The group also commiserated about dealing with studio notes. Robert Rodriguez brought up an amusing anecdote regarding last minute changes. While working on a poster for Jewel of the Nile he was asked to make significant alterations to the size of the character’s heads in the piece. He complained to the art director, who told him, “Every time they want to make a change, you smile and say, ‘Of course we can do that, no problem, that’s just another $500 or $1000 dollars.’ In the end the $10,000 job ended up being $39,000. It was good advice.”

Before the panel wrapped, each artist discussed where their ideas came from. Both Akiko Stehrenberger and Rory Kurtz said that they liked to watch the films they were working on for inspiration. Sometimes a single powerful frame or image would jump out and inspire the poster. Stephen Kramer Glickman concurred and pointed out that sometimes, if done well, a movie’s poster is the one thing people will remember about a movie—sometimes, even more so than the film itself.

Posters and cards for sale too!

A few of us have been invited by ASIFA-Hollywood to sell our posters and trading cards at their table on Saturday from 12:00pm-1:00pm, and possibly longer.  Not sure right now the exact times.

But I searched through what I had that might be of interest to ComicCon visitors, and came of with some pretty cool stuff.  I have posters for Star Trek and for The Day the Earth Stood Still.  I also have trading cards for Generation X, X-Men.  And a few for Spiderman.  And I have several of the original paintings for the X-Men characters.  And at the last minute I found some posters I had forgotten I even had.  They are mini-posters for The Jewel of the Nile about 17.5″ wide.

The Star Trek poster was a promotional poster (1991) showing Kirk and the crew on the bridge being shaken up by some terrible assault on the Enterprise.  The poster for The Day the Earth Stood Still was to celebrate the fiftieth anniversary of the 1951 film.  And they are both large posters, approximately 27″ x 41″.

This is going to be a kick.   Maybe see you there?

My son has gone to this for years, and now that he isn’t going anymore, I get invited!  Very exciting, and I am looking forward to what I’ve heard described as crazier than Mardi Gras.

I’ll be there as part of a panel discussion titled Masters of the Illustrated Poster on Friday July 19th from 1:00pm to 2:00pm.  It is being presented by ASIFA-Hollywood and Paul Shipper Studio in Room 23ABC.

ASIFA–Hollywood and famed illustrators who have worked on entertainment art for the last 50 years will discuss their craft and what inspired them to pick up the baton and follow in the footsteps of their mentors. Moderator Stephen Kramer Glickman (actor, Big Time Rush, The Night Time Show) is joined by panelists Steve Chorney (Who Framed Roger Rabbit?, Quigley Down Under), Robert Rodriguez (The Jewel of the Nile, City Slickers 2), James Goodridge (Deadpool, Book of Henry), Matthew Joseph Peak (Nightmare on Elm Street films), William Stout (Life of Brian, Wizards), Paul Shipper (Avengers: Infinity War, Star Wars: The Last Jedi), Akiko Stehrenberger (Kiss of the Damned, The One I Love), Rory Kurtz (Baby Driver; I, Tonya), and Jason Edmiston (Evil Dead 2, Texas Chainsaw Massacre).

Hope I might see some folks I know….be sure to say hi! 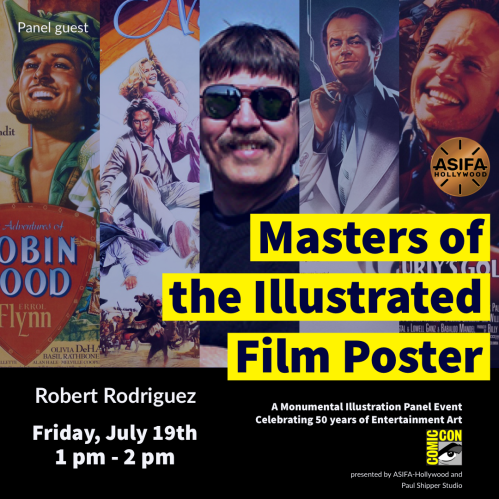